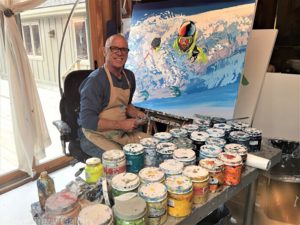 When I paint it is all about the abstracted form within the subject. My work is a lot like music, it flows with rhythm and one part is not alone unto the other. All the shapes should play in concert.

I am on a constant journey developing an abstract esthetic in my work. Currently landscapes are a setting for a conversation about the plight of the polar bear and in some instance the human form. But most important to me is the impact of the abstract image.

Tracy begins his work with a brush but will switch to a palette knife as the work progresses. He is drawn to the palette knife because of the unpredictable way it transfers paint to the canvas. His distinct style is impressionistic, textural and leans towards the abstract. His love of color is obvious in his painting as he strives to incorporate a brilliant palette within each work. He creates art that emanates a sense of love and endearment for the planet and hopes to present a quality communication about the beauty that naturally surrounds us.

Steve Tracy was born in Santa Clara, California, in 1953. His childhood was spent growing up in Colorado and California. He was given his first set of oil paints at the age of 10 and quickly discovered that art could free him from the chaos of everyday life.

Inspired by the cultural revolution of the late 60?s and early 70’s Steve relocated to New York City where inspired by the atmosphere he enrolled in the School of Visual Arts in 1972. Steve continued his studies at many respected art schools and is a graduate of the American Art Institute. He perfected his talents through work with various studios in San Francisco, New York and Colorado.

After graduation Steve began work as a scenic artist with film companies. He found work on HBO’s “Dawns Early Light” and in 1991 won an Emmy Award for this work. His work as a visual art instructor has seen him work in art institutes in Colorado and Hawaii as well as conducting several workshops throughout the United States and Scotland.

Today, Steve lives in Southwest Ontario where he donates his time to public art endeavors in the area. He continues to exhibit and teach throughout the United States and Canada.