CV Art and Frame has access to a comprehensive collection of artwork by this artist. Commissions are available. For additional details, please contact us at phone #: 317-873-2976 or email: info@cvartandframe.com 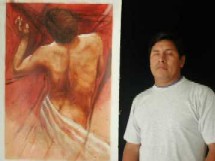 Born in Lima, Peru in 1965, Rojas (aka Baca), has devoted his energy to the rediscovery of the nude figure. He considers his neo-figurativism as the reflection of the most beautiful shapes and forms created by God. His profound and confident lines express a self-assurance that conveys his deep believes in a Supreme Creator.

As Baca, he explores painting as an abstractionist with tremendous power and decision in the resolution of his canvas. Agustin serves the brush when applying with intensity the color, as well as the lack of color, in his compositions, similar to the American Abstract Expressionists.

His humble beginnings in Peru began at very young age, supported by committed parents who were interested in the arts. Art was the core throughout his entire education culminating in the acceptance of the most prestigious Painting School in Lima, the Escuela de Bellas Artes. where he graduated in 1992 with top honors. He also studied in the ateliers of the well-known painters José Aldana and Miguel Nieri.

With a lot of resources and inspired by the competition, Agustin defines his painting and surrenders to the force of abstraction which is also evident in his popular nudes which he paints under the name of Rojas.

His determination in the exploration of different mediums define his character. His exhibitions, in addition to the numerous ones held in Peru, include saloons in Italy, Spain, Venezuela, Paraguay and Ecuador, from where his oeuvre has dispersed into a number of serious art collectors.