“Symbols is a representation of what may be important to many of us as humans.  Some may be more powerful than others” 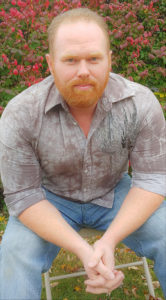 Jesse Toombs is a highly versatile self-taught artist. Jesse primarily works in acrylic, creating serene landscapes, whimsical cottage scenes, and powerful abstracts. He also creates original, custom automotive art ranging from motorcycles to motorhomes, carrying his distinctive impressions of the world across the country. All this without formal art training.

Jesse is passionate about multiple mediums of artistic expression and is an accomplished musician, mastering multiple instruments and even releasing an album in 2009. He also has won several weightlifting competitions, making physical fitness a major part of his daily life.

Originally from the beautiful Ozarks of Missouri, Jesse drew a great deal of inspiration and spent many evenings drawing to lantern light. Jesse made Indiana his home after spending six years in the United States Air Force. He currently resides in Fort Wayne, Indiana with his wife Melissa and children.

Recently, one of Jesse’s auto art pieces received First Place at the 2020 Jonesboro River Rally in Jonesboro, Indiana. Jesse is available for commissions.