Music, Art, Photography – there are no rules for Chad as he creates these rhythmic expressionism works. 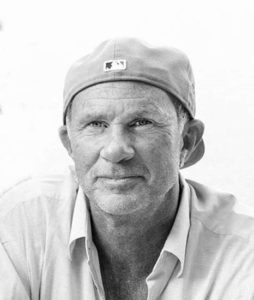 Over the last three decades, Chad Smith has become one of the most recognizable figures in rock and rhythm. Born in Minnesota and raised in
Michigan, Smith began playing drums at the age of seven and performed with a number of bands locally before joining the Red Hot Chili Peppers in 1988. As the drummer for the Red Hot Chili Peppers, he’s sold more than 80 million albums and been inducted into the Rock and Roll Hall of Fame. He is also a member of super-group Chickenfoot and the Bombastic Meatbats. Smith’s work has also been featured in the studio for artists including Ozzy Osbourne, Glenn Hughes, John Fogerty, the Dixie Chicks, Jenni Kid Rock, Jake Bugg, the Avett Brothers, and Joe Satriani.

In 2015, Chad Smith went from drum kit to canvas with his first collection of artwork titled “Parallax.” A massive selling debut art release, “Parallax” featured 13 visuals on canvas created from rhythm. Using drumsticks that light, much like a painter would use brushes with oils, Smith constructed the visuals through his movement behind the drums. His work in this rhythmic art form has continued and for the first time Chad Smith is showcasing more than 80 new works of art to the world.