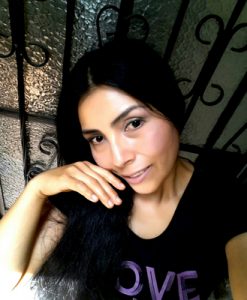 Born in Lima, Peru in 1974, Jara has had a penchant for the visual arts since her early childhood. Jara possesses a natural talent for the “practical applications” of certain artistic disciplines. She attended the Universidad Catholica de Peru where she studied diverse subjects such as interior, graphic, and retail display design. Jara’s forte is as a landscape painter. Her style is redolent of the 19th century Barbizon school. This period represented a major shift in that artists were using nature as the primary subject. “My model”, says Jara, “is nature which is all around me.” Landscapes are allegories of the human soul. Jara’s style is modulatory; transposing the viewer from the active to the contemplative; from active daylight to reflective evening. The steady low of rivers and streams symbolize a continuum. One is transported to time and space to a “magical” space where the soul is replenished. Each interpretation ends to be purely subjective. “My art brings out conflicting emotions”, says Jara. “The canvas is a battlefield of conflicting emotions”, she adds. “Some may find solace in the tranquil twilight imagery; others sense regret at the “twilight” of an unfulfilled life.” The success of Jara’s interpretations lie precisely in this interplay of emotions. Jara is up-and-coming in the art world. She has a tremendous depth and thoughtful style despite her relative youth. Her circle of admirers continues to grow, and will undoubtedly make her a formidable artistic force in the years to come.