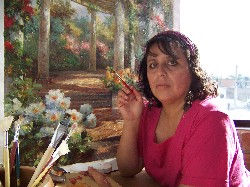 “Painter of Happiness.” Born in Lima, Peru, in July 08,1966. Elizabeth Peña is one of those rare natural talents that is evolving into a master painter. She started while quite little making beautiful drawings and after a few years, her parents decided to persuade her to attend Art School. Not very keen on it, but not totally discontent, she started school. Art School was a time for training her magnificent drawing skills and not more than that. She was well known at school for her art independence.

Peña has always loved the classics. She admires, especially well, Rembrandt. The biggest influence on her, however, is the french master Fatin-Latour. Other influences include the style of Baca Flor and the sobriety of Merino, both of whom are Peruvian artists from the past century. Despite her recent introduction to the American market, her work has been received with acclaim. Presently, Peña is showing in more than 20 galleries in the United States and Canada.