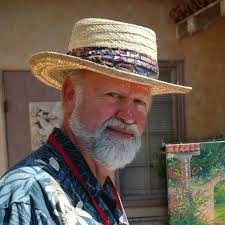 Born in Quebec, Canada in 1943, Charles H. White began early in life to show an interest in art.  Beginning with pencil sketches of birds and animals at age six, he developed his talent for draftsmanship to the point where he won a Canadian art contest at age ten.  By the age of fourteen, he had switched to oil painting.  He was successful in selling many of his landscapes as a teenager.

Mr. White studied art at Brigham Young University where he graduated in 1967.  He travels extensively to seek out the most spectacular landscapes, combining the elements of many different places into one, perfect and romantic setting.  His works have found places of honor in homes where a premium is placed on elegance and serenity.  He has said “I want to communicate with people on an emotional level and share with them the calming influence that the natural world has on me.”

With more than forty years of experience in creating works of art, White’s talent and expertise is evident when you experience the gracefulness of his gardens and landscapes.  Each composition is classically crafted with attention to the principles of design, color, value and contrast.  His time-consuming technique creates a luminous, multi-layered work that invites the viewer into a world of tranquil beauty.

Over the years White has enjoyed critical acclaim from both the public and his peers.  He has won numerous awards and his original paintings are collected around the globe.  He shares his knowledge of painting in lectures and workshops and is currently an instructor in arts at the Danville Cultural Alliance near his home in the East Bay of San Francisco, California.