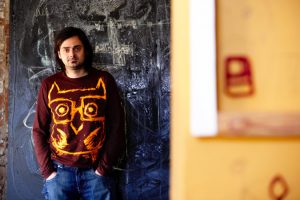 Xavi Carbonell was born in 1971 in Alcoy, Spain where he currently resides.
His passion for art and a compelling need to express himself, led him to enter the world of painting. His main influences have not only come from the hands of artists like Basquiat, Cy Twombly, Saura and other Abstract Expressionism, but also of the doodles sketched by children. His work is reflected in his interest in Children’s Art, not only from a formal point of view, where the iconographic elements are sketched with lines that seem to have emerged from the hand of a child, but also in the choice of subjects. Through his work, he invites us to enter this particular universe with childlike qualities.

His work has been exhibited in galleries, museums and art centers including Arteinversión, Carmen de la Guerra (Madrid), THEMA (Valencia), the CADA (Alcoy). Other noteworthy locations internationally, are exhibitions in Dubai, Antwerp and New York .

He has received numerous awards: XIII Painting Prize 2012 University of Murcia, the Third Biennial of Engraving Etching 2011 Valladolid, and in three editions of the Bancaja Prizes for Painting, Sculpture and Digital Art, in 2009, 2008 and 2006 as well as on I Alcoy Art Biennale, 1996.

His work is included in numerous public and private collections.